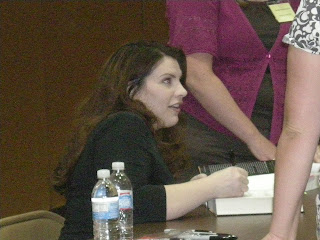 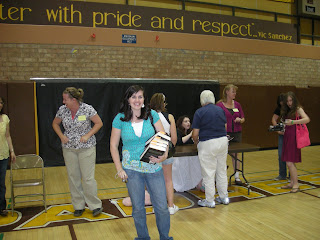 I just had to get a pic with both of us in there. They wouldn't let you take pics with her, so this is the best we could do. 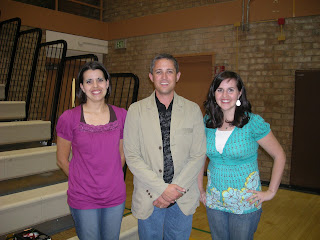 Tara, Pancho (Stephenie's husband) and myself.
So.... last night was awesome! Tara and I went to Marcos de Niza where Stephenie Meyer, the author of the Twilight series, was doing a book signing. Stephenie talked for about 20 minutes and answered questions and then started her signing. We were assigned by letter to go up for the signing and unfortunately, we were letter U so we had to wait for awhile. We went home for a little bit and came back. It was definitely worth the wait though. She signed The Host, her newest book that is unrelated to the Twilight series and then signed 2 of her previous books. I had her sign New Moon & Eclipse because my Twilight book is paperback and all banged up. When she spoke, she mostly tried to focus on The Host, her latest book that came out last Tuesday. I just started reading it Monday but I'm not very far since I haven't had time to read. She also answered a few questions about Twilight. She said that she's just finishing editing Breaking Dawn, which comes out in August. She also said her next project is Midnight Sun, which is Twilight from Edward's point of view (can't wait for that!!). She said she has visited the set of the movie a few times and is very pleased. She said the chemistry between Bella & Edward is GREAT! She was very happy about that (and so am I). She also said that the director has taken most of her notes on the script, so I'm sure that will help the movie be more like the book. Other than that, she said that if The Host were made into a movie, she had a few actors in mind to play the parts. She is still unsure who would play Melanie/Wanderer. She said Matt Damon would be perfect for Jared (I agree), and that James McAvoy would be perfect for Ian. I was definitely excited to hear that since he's my favorite actor right now. When it was our turn to get the books signed, I really didn't know what to say to her since she was signing so fast and they were trying to get through the hundreds of people, so we just talked about how we were in love with James McAvoy. It was cool cuz she kinda stopped signing books just so we could talk. We were both trying to explain to Tara who he was and why we liked him so much. We agreed that Becoming Jane is what made us first like him so much. After that, we just said thank you and went and talked to her husband, Pancho, for a bit. We asked him some questions. He told us he quit work and is now a stay at home dad. He doesn't go on tour with her so he has to stay home and watch their three boys. He said that Stephenie never asks him for his advice on the book. He also said that he was a "bad husband" and discouraged her from writing the first book because she was staying up too late and would be tired and cranky the next day when she had to wake up early and get the kids ready. He also said that he waits to read the book til it's done and bound. We couldn't believe that part. Who could wait when they know the book is sitting on their computer!?!? Even though he does wait he said that he knows how Breaking Dawn ends. Oh, the anticipation!!! Pancho was very nice and we were so happy we got books signed and got to meet Stephenie. We will probably go see her again when Breaking Dawn comes out... just 79 more days! Woo HOO!!!!

We can't wait for this week!! 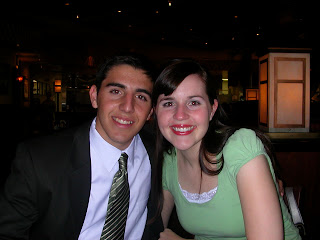 Tanner & I before he left. 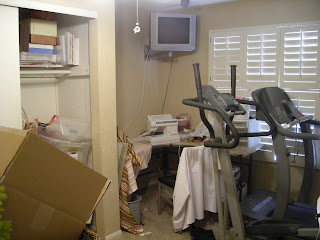 A pic of my mom's sewing room before. 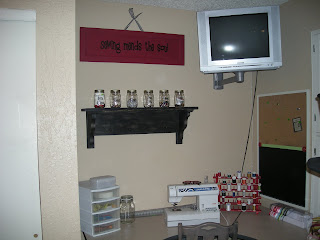 A pic after we organized her room. 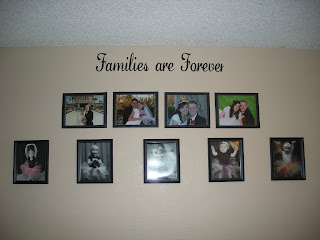 This wall was blank before so we put of pics of all the kids & grandkids. 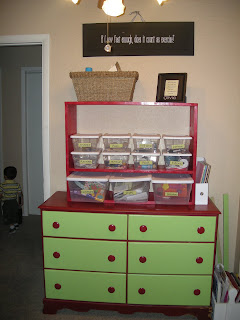 We painted her drawers and put all her stuff in bins. She's been so busy getting Tanner's room done that she put her room on the back burner.
First of all, last week was awesome. Mother's Day was great!! It was nice celebrating the moms around us and I didn't mind getting a few gifts myself. I guess I kinda forgot that I would get some stuff, so it was nice when I did. Lorin and I were able to make something for his mom's which I will have to take a pic of and post later. We were also able to help with my siblings to transform my mom's sewing room on Saturday. It was a little unorganized so we had my dad take her out for the day while we hurriedly put it together. It was crazy but fun!! Even though last week was great, we are even more excited for this week BECAUSE.... Tanner is coming home off his mission, Kellyn is due to have her baby Friday, and Tara and I are meeting Stephanie Meyer, the author of Twilight!!!

Stephanie Meyer will be at Marcos de Niza Tuesday night so Tara and I are meeting her, buying her new book and getting our Twilight books signed. How could we pass up on opportunity like that? But more exciting than that is Tanner coming home Thursday and we are soo excited to see him. I just love that kid so much!! He'll be coming home to 3 (maybe 4 depending on Kellyn) new nieces & nephews. Then, Kellyn is due to have Cambden on Friday. If she doesn't have him on that day, then she will meet with her docs next Monday to schedule a possible induction date. We can't wait for the arrival of Camden as well as the arrival of Elder Ritchey! Woo hoo!! 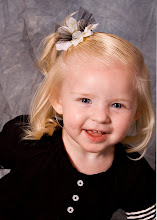 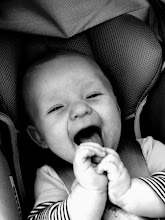